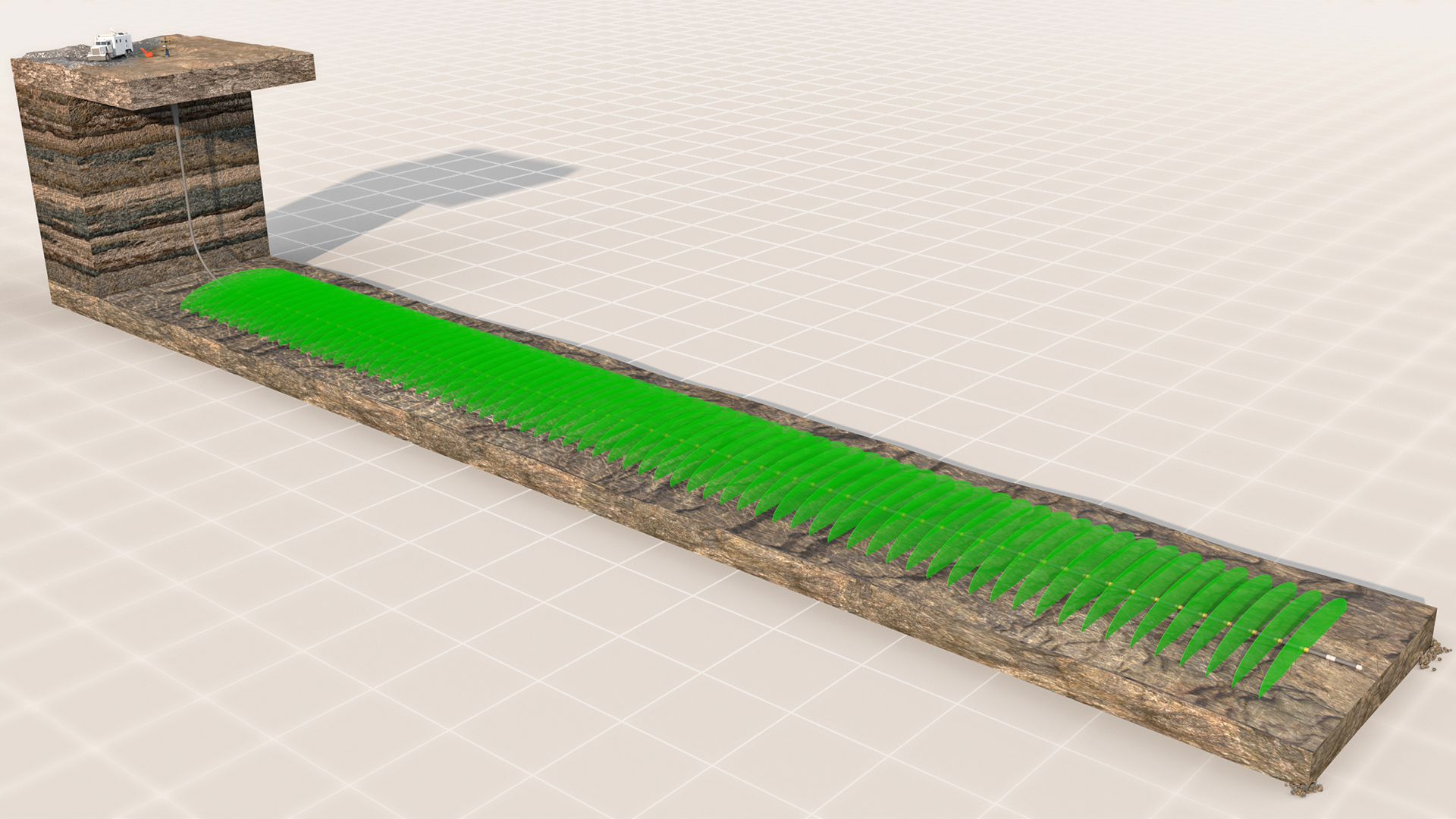 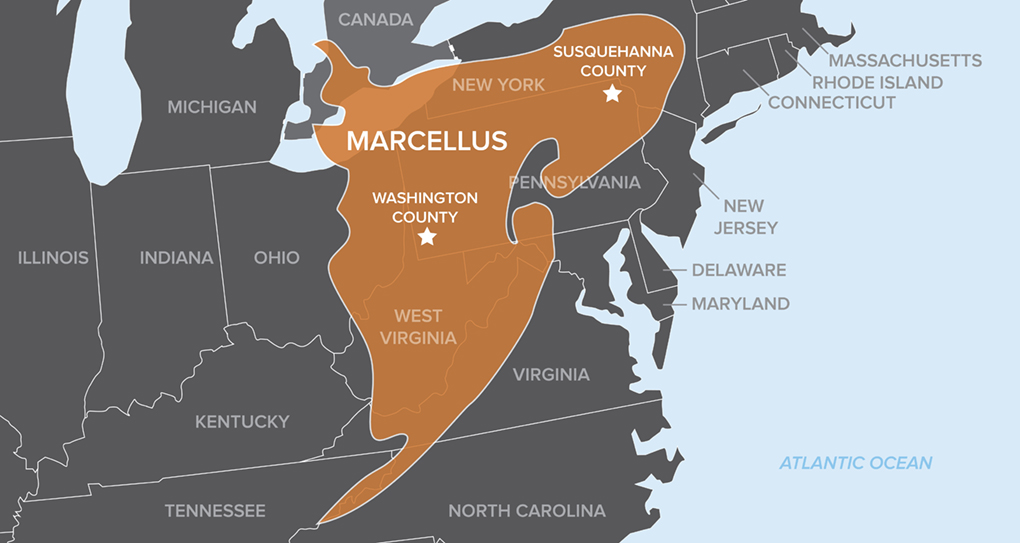 The Marcellus Shale is an attractive formation for oil and gas operators due to increasing estimated total recoverable reserves and its proximity to nearly one-sixth the U.S. population. The formation is found at depths from 4,000 to 8,500 ft and underlies approximately 95,000 square miles of Pennsylvania, New York, Ohio and West Virginia. With 262 Tcf in estimated recoverable reserves and 1,500 Tcf original gas in place, the Marcellus is being hailed as a top contributor to the U.S. gas reserves with positive well economics. Efficient and reliable drilling and completion strategies are critical to ensure operators are optimizing the development of the Marcellus moving forward.

As a true shale, low porosity and permeability values make the Marcellus challenging and cost intensive to develop. Maintaining communication with the formation and capitalizing on natural fractures is crucial to attain high ultimate production. The conventional cemented casing, “plug and perf” (CCPP) method has historically been the completion strategy of operators in the Marcellus, but in order to ensure success as development ramps up, operators must consider what strategy will be the most effective given the formation characteristics.

Compared to open hole completions, the CCPP method is more cost intensive due to the additional equipment and time required for tripping in and out of hole. This results in an inefficient and time-consuming process. Production using this method can also be limited, as cementing the wellbore cuts off communication to many of the natural fractures and fissures that would otherwise contribute to overall production.

Packers Plus open hole, multi-stage systems allow operators to capitalize on natural fractures and ensure maximum contact with the formation. Open hole completions allow for production from the entire length of the wellbore, as opposed to CCPP, which restricts production to perforations. This grants open hole completions access to production from existing natural fractures in the formation and as a result, delivers higher recovery compared to the CCPP method.

High fracture stage density using the StackFRAC® HD system ensures optimal drainage of the formation. This system ensures efficient fracture treatments along the entire lateral via a single, continuous pumping operation. It also allows operators to put the well on production immediately after stimulation is complete, increasing the number of wells they are able to complete every month and accelerating connection to the sales line. 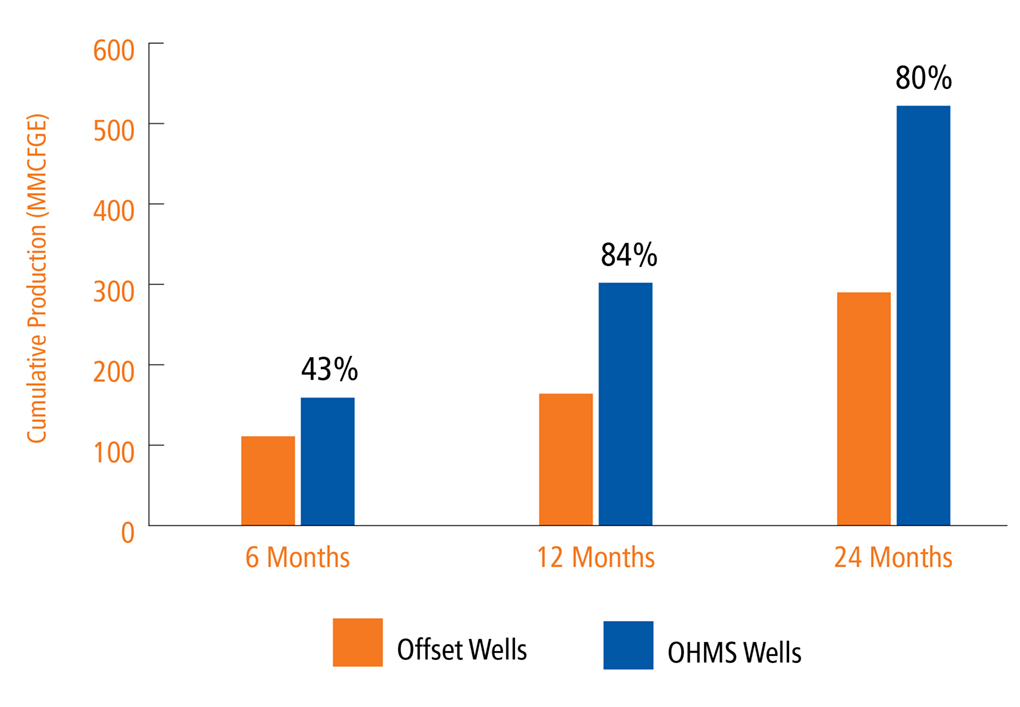 A comparison study was done in the Marcellus to measure production of wells completed with StackFRAC systems compared to surrounding offset wells in the field completed using the CCPP method. The two study areas were in Washington County, PA and Susquehanna County, PA and cumulative production was compared at 6, 12 and 24 months. In both areas the StackFRAC wells were drilled and completed between 2007 and 2009, while the CCPP wells included those completed in the same time period to newer wells completed in 2011. The StackFRAC wells were completed with an average of 8 stages in both counties and an average lateral length of 2,500 ft and 1,800 ft in Washington and Susquehanna County, respectively.

In both study areas, the wells completed with StackFRAC systems outperformed the CCPP completed wells in terms of production. The StackFRAC wells produced from 43% to 84% higher than the offset CCPP average in Washington County (Figure 1). These results were also seen in Susquehanna County with the StackFRAC wells increasing production by up to 37% compared to the offset CCPP average. In addition to higher production as demonstrated by this study, StackFRAC systems also provide improved efficiency and cost savings compared to the CCPP method. StackFRAC completed wells can be stimulated in less than a day compared to approximately 2 to 3 days required for CCPP wells. This efficiency also reduces equipment and personnel costs.

With the ongoing success of the StackFRAC system throughout the U.S., Packers Plus is focused on developing technology that will continue to improve production results for operators. For example, the QuickFRAC® system is allowing operators to increase stage numbers available in the StackFRAC HD system. Packers Plus has run multiple jobs with this new technology, achieving over 40 stages in a single well. With this and other technologies being developed by Packers Plus, operators can continue to achieve improved results moving forward in the Marcellus Shale.